I live my life by three core principles that have served me well:

A man who had been married to his wife for 75 years offered this bit of wisdom to me years ago, and he couldn’t have been more right.

If a man’s wife is happy, he will be happy. It’s that simple. I cannot attest to the inverse, but since it doesn’t rhyme, I suspect that it does not hold up.

If you find that you cannot make your wife happy, or that your wife’s happiness is not making you happy as well, then you married the wrong woman.

Sadly, many men do.

2. Procrastinate in all that you do unless an important window of opportunity is closing. In these cases, act immediately regardless of circumstance or consequence.

I believe in waiting until the last minute to complete any task that does not bring me enjoyment or make my life more efficient, productive or simple. I honestly believe (through unfortunate personal experience) that every day could be my last. Knowing this in my heart in a way that I suspect most do not, the last thing I want to do is spent my final hours completing mundane chores, filling out needless paperwork, or tackling a meaningless assignment that I could complete three days from now.

However, I am also keenly aware of closing windows of opportunity and act accordingly.

But don’t allow procrastination to lead to regret. 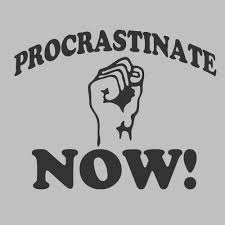 3. Make decisions based upon my 4 favorite words: I told you so.

In making a decision, I attempt to evaluate the “I told you so” nature of both sides of the argument. I calculate the probability of each side achieving an “I told you so” moment, as well as the severity of the potential “I told you so.”

Once these factors have been properly considered, I make my decision.

For example, during the recent winter storm that devastated so much of Connecticut, a tree came down in our backyard, just missing our home. At least one other tree and several large branches were still overhanging parts of our home, and so my wife decided that we should sleep on the first floor, fearful of what might happen if the roof was actually struck by one of these large trees or branches.

I thought this was a knee-jerk reaction, and I was annoyed. I wanted to sleep in my bed, and I thought that there was very little chance of our house being struck by a falling tree.

But in the end, I agreed to sleep on the couch. Though I was almost certain that I could have spent the night in my bed and said “I told you so” in the morning, the potential severity of my wife’s “I told you” was considerably higher.

In my case, I could’ve said, “See? I told you so. Sleeping in bed was perfectly safe.”

In Elysha’s case, she could’ve said, “See, I told you so. That massive tree came right through our bedroom ceiling and now you are dead.”

Though my “I told you so” was considerably more likely, Elysha’s was much more severe in terms of overall impact, and therefore I slept on the couch.

Also please note that although I could have rightfully said, “I told you so” to Elysha in the morning, I did not. Just because I evaluate decisions based upon the probability of being able to say “I told you so” doesn’t means I always say it.

Not with my wife, at least.

Doing so would violate Rule #1.