A couple bits of book love that have me feeling great this week:

Dan Mayrock is in a bind: He has not yet told his wife, Jill, that his business is failing and they are almost out of money. He’s kept this secret for 13 months now. A former teacher who left his job to open a bookshop, Dan struggles daily with not only the slings and arrows of economic instability, but also the existential questions of what it means to be a man in the 21st century. What if he can’t provide for his family? How can he measure up to Peter, Jill’s deceased first husband? Is robbery a viable, not to mention moral, supplementary career path?

Meanwhile, Dan’s father, who left home when Dan was only 9 years old, is trying to reconcile. Too angry to even open his father’s letters, Dan turns to Bill, a 72-year-old widower he met while scouting a bingo hall for theft potential. A Vietnam veteran who lost his wife to a carjacking and his son to cancer, Bill may be the friend Dan needs.

Told entirely through the series of lists comprising Dan’s journal, Dicks’ latest novel sketches surprisingly complex characters. Much like the famous six-word story often erroneously ascribed to Hemingway (“For sale: baby shoes, never worn”), these lists—and the silences they outline—conjure a tense world in which, no matter how hard Dan tries to gain control of his finances, his life, or his emotions, he continually gets stuck in simply recording the absurdities of life and making futile plans to become a hero to Jill. As the days pass, Dan’s lists reflect his increasing desperation, ratcheting up the tension until life throws a potentially devastating curveball at him that pushes him to reassess everything he had thought to be true.

A clever, genre-bending portrait of a man under pressure.

A staircase that features a features favorite books. Clever!

The reader sent it to me specifically because of the third step, which features the UK edition of Memoirs of an Imaginary Friend.

When I published my first novel a decade ago, I had no idea how kind, thoughtful, and generous readers could be. Such a beautiful surprise. 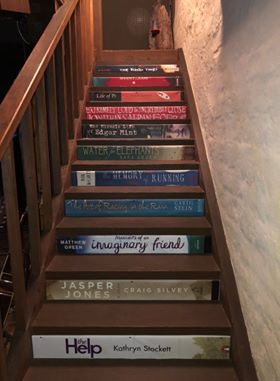 Posted in Books, MEMOIRS OF AN IMAGINARY FRIEND, Twenty-one Truths