Perhaps you’ve heard about the woman who wished to dine solo at a Portland, Oregon restaurant on Valentine’s Day and is now suing the restaurant because she claims she received rude service.

Kathleen Hampton is asking for $100,000 in damages and apologies both in person and in print in ‘the news and local newspapers,” so we already know – regardless of what actually happened that night – that she is insane. 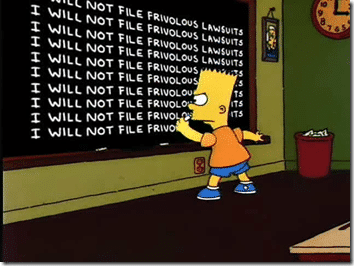 “She made reservation for two and when she got there, said: ‘Oh just by myself.’ We offered for her to sit at the bar with other single diners since Valentine’s Day is very busy and all we know is she got up and left without paying after she drank two glasses of wine.”

It was an amusing enough story on it’s own, but when I read the complaint, which Hampton filed herself, amusing quickly transformed into hilarious. I suggest you read the whole thing (which isn’t very long but is filled with hidden gems), but if you’re pressed for time, the section that Hampton has labeled “WHAT I WANT” is entertainment enough.

I want to be made whole by public apology both in person and in writing in news and community newspapers. I don’t want this to happen to anyone in the inner North/Northeast area. When you don’t have business owners that don’t live in the area they don’t have a vested interest in community. I also want $100,000 to make sure all business owners on N.E Alberta know we are serious about our community

I chose not to reproduce the random spaces or superfluous capitalizations that Hampton frequently uses in her complaint, mostly because the actual demands that she makes say more about her character than any amusement that I might have at the expense of her writing skills.

It’s hard to imagine that people like this exist outside of fiction. Even if Hampton’s complaint is true, it’s hard to imagine why her husband or a family member or friend didn’t advise against these genuinely stupid demands, suggesting instead that perhaps this was not as big a deal as she seems to think and maybe restitution in the form of a free dinner or two at a restaurant of her choice might make more sense, rather than attempting to bankrupt a restaurant for what amounted to rude behavior.