Last night, our two year-old son was watching videos of the family on the iPad. He came upon one of his big sister and said to no one in particular, “Beautiful Clara.”
Our hearts melted.

Clara is equally fond of her brother, introducing him to strangers whenever possible and referring to him as “adorable” and “cute” constantly. 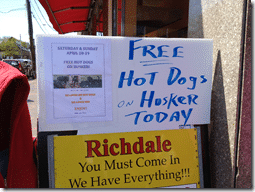 This may not always be the case (as I know you jackass naysayers and joy destroyers are already thinking), but for the last two plus years, there has not been a spot of sibling rivalry and almost no fighting unless they both want the same toy at the same time.

We’ve been very fortunate. It’s also through little effort of our own. To be honest, I think most of the credit goes to our daughter, who has never expressed an ounce of envy in terms of her brother. When I told her that Charlie was a boy, she wailed in agony for about 20 seconds and then immediately fell head-over-heels in love with him.

It’s been her unwavering love and overall joy with having him as a brother that has forged their close and blissful relationship.

Clara’s done a lot of great things in her first five years, but this is probably her crowning achievement.

It’s produced moments like this, which I will never forget.