My brother had a root canal last week.

Unfortunately, I have some experience with root canals. When I was 17 years old, I was in a car accident that dislodged my entire bottom row of teeth. Doctors wired the row back down, losing one one in the process, and the teeth remarkably took root again. Unfortunately, they are now more naturally prone to problems as a result of the trauma. 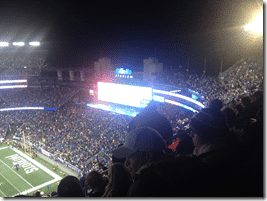 My first root canal took place in 1993. It was a three day process which required the dentist to drill a hole through my tooth down to the nerve and then pack the tooth with a filling. Each time filling was added, he would pack it down until the filling pressed against the nerve and caused me pain, at which point I was required to raise my hand to tell him that he had reached the level that caused pain.

I couldn’t receive Novocain or any other pain suppressor because the dentist needed to know when it hurt in order to do the job.

This went on for almost two hours. It was awful. It hurt like hell for days and days later.

My second root canal took place in 2006. Elysha and I were in Bermuda on our honeymoon, and during the last day of the trip, my tooth began to ache. By the time we arrived home, it was hurting badly, and the dentist determined that a root canal was needed.

This root canal took less than an 45 minutes and was entirely pain free.

I hugged the dentist when he was done. I nearly cried.

I should be grateful to live in a time when medical advancements have transformed a painful, three day process into a simple, 45 minute procedure. Every day scientists takes steps closer to  eradicating disease, extending lifespan and improving our overall well being.

I should be thrilled.

It’s entirely the opposite.

Each medical (or dental) advance reminds me of how many more breakthroughs are yet to come. I’m reminded about how human lifespan will continue to be extended, as it has been for centuries, and how I might miss out on this future progress unless I continue to avoid death.

I appreciate these advancement in medical technology, but I worry that they are not  coming fast enough. One of my greatest fears is that scientists will develop an anti-aging serum a week or two after I die.

There may even come a day when human immortality is a possibility, either physically or by means of downloading our consciousness onto a computer. I know it sounds like a pipe dream, but it really isn’t. Scientists are working on these technologies right now.

If the human race achieves some form of immortality a day or two after I have died, I ‘m going to be very annoyed.