Victor Mather of the New York Times proposed 10 Olympic events that should be resurrected for the upcoming London games, including tug of war.
Tug of war was an annual competition at Yawgoog, the Boy Scout camp where I spent many of my childhood summers, and my troop, Troop 1 of Blackstone, Massachusetts, was a frequent winner.

Unfortunately, we were also frequently accused of cheating. 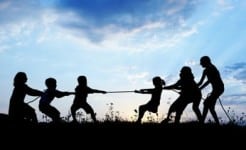 In order to ensure a fair competition, a weight limit was set for each tug of war team. Only so many pounds of boy were allowed to pull on the rope during a competition.

Our strategy was to place as many boys on the rope as possible, regardless of their size or strength. In fact, the smaller the boy, the better, since an especially small boy meant we might be able to squeeze an additional body onto the team. My Scoutmaster, an apparent tug-o-war mastermind,  understood that lower body strength was far superior to upper body strength in a tug of war competition. So while the opposition might have a half a dozen muscle-bound monsters on their end of the rope, we would have a dozen or so kids who were less than half their size pulling on our end while I anchored the end.

To an outsider, it looked like our troop didn’t stand a chance. Our team consisted of small, wiry, middle school boys whose voices had yet to change, and we were competing against teams of high school juniors and seniors who looked more like men.

Yet almost without fail, we would win with ease, causing the other troops to question our compliance to the weight limit. More than once, our team was  forced to mount the scale and confirm our total weight.

It was one of the few instances in life when the little guy was able to defeat the big guy in a contest of strength.

Heady days that I will remember with aching fondness until my last breath.