No surprise that Mark Twain managed to turn a simple notice about a stolen umbrella into an amusing reward for the capture and execution of a small boy. 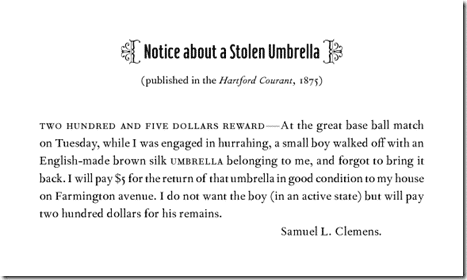 Also no surprise that Scott Bennett’s newspaper farce did not go quite as well. 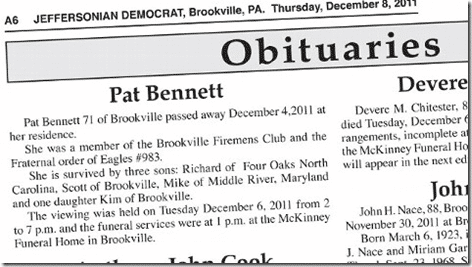 The Pennsylvania man wrote an obituary for his mother (who was still alive) and got it published in the local paper in order to get paid time off for bereavement.

Unfortunately (for Bennett), relatives called the newspaper after the obit was published to say that Bennett’s mother was actually alive and well.

Unconvinced, Bennett’s mother paid a visit to the newspaper to confirm her liveliness.

Bennett was arrested and charged with disorderly conduct and fired from his job, of course.

Scott Bennett was simply out of his league.