You have probably heard about the new book GO THE F***K TO SLEEP. 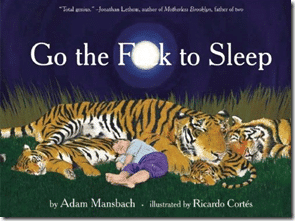 If not, it is a New York Times bestselling picture book written for adults that plays on the frustration that some parents feel when trying to get their children to go to sleep.

It is crass, vulgar, slightly repetitious and exceptionally funny.

This is why I was so surprised when I saw this review on CNN, which categorized the book as portraying “the hostile environment in which too many children grow up.”

For far too many kids, the obscenities found in Mansbach’s book are a common, everyday household language. Swearing is how parents across the social, educational and economic strata express their disappointments or anxieties, their frustrations and outright anger at their children. Sometimes the biggest bully in the neighborhood lives in the same house you do. Sometimes it’s your parent.

Um… okay.  Sure.  Parents probably swear too much at their children, and if so, that’s a terrible thing.

And some parents are verbally abusive.

But does this preclude an author from using obscenities in a book directed at adults?

Until we find a way to end the bullying of children at the hands of their parents, no one can write a satirical portrayal of the process of putting a kid to bed?

This seems a little extreme to me.

But this was my favorite part of the review:

Imagine if this were written about Jews, blacks, Muslims or Latinos," says Dr. David Arredondo. He is an expert on child development and founder of The Children’s Program, in the San Francisco metropolitan area, which provides consultation and training for those working with troubled youths.

It is hard to imagine this kind of humor being tolerated by any of the marginalized groups Arredondo cited. Consider the lines on page 3:

"The eagles who soar thru the sky are at rest
And the creatures who crawl, run and creep.
I know you are not thirsty. That’s bulls**t.
Stop lying.
Lie the f*** down, my darling, and sleep."

Um… again I say yes.  If Adam Mansbach wrote a book that depicted Muslims or Latinos or Jews as liars, I agree that it would not be well received.

I’m not sure how they feel about being referred to as “marginalized” but yes, writing a book that tells African Americans to shut up, lie down, stop their lying and go to sleep would not be a good idea.

But is this genuine analysis or more akin to declaring that the sky is blue?

Perhaps we can get Karen Spears Zacharias and Dr. David Arredondo a couple of Captain Obvious costumes. 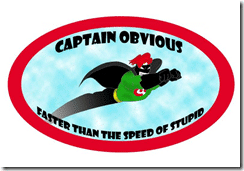 Congratulations, guys!  You’ve discovered that insulting people based upon their racial or religious backgrounds is not cool.

But satirically portraying a feeling that many parents have had, and capturing the inner dialogue of these parents in an amusing and authentic way is funny.