In suggesting that the shooting at Ford Hood be labeled a terrorist attack (and implying that the Obama administration was rejected the label for political reasons), former Bush press secretary Dana Perino said no terrorists attacked the US while President Bush was in office.

“We did not have a terrorist attack on our country during President Bush’s term. I hope they’re not looking at this politically. I do think that we owe it to the American people to call it what it is.”

I realize that this claim was made on FOX News, which has been known for the occasional, hilarious mistake, but did everyone on that network completely forget about the worst terrorist attack on US soil?

I realize that it occurred about eight years ago, which is a long time for some people to remember, but I am relatively certain that the 9/11 attacks occurred while Bush was in office.

More disturbing was that no one on-air noticed her gaff and attempted to correct it.

Of course, Perino wouldn’t be Press Secretary until almost six years after the 9/11 attacks, so perhaps she just didn’t hear about the destruction of the World Trade Center and has been too embarrassed to ask about that big hole in Manhattan ever since. 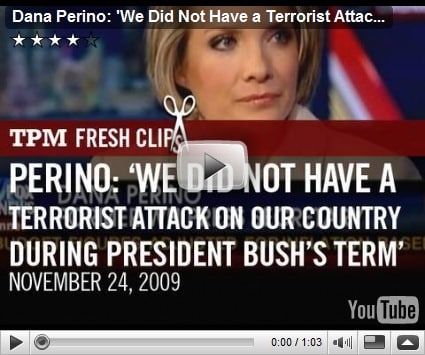